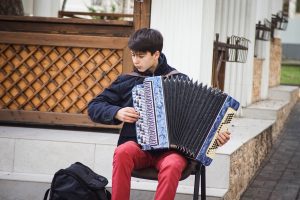 I.
My grandmother poured a shot of brandy into her coffee. Puna, she called it. She kept the liquor bottle in the kitchen cabinet, top shelf. Years later, I learned puna meant red. Years later, I learned the word for river, the kind that one can’t step into twice. A photo in black & white: my grandmother in a house dress, outside, drinking beer with my uncles. A case of beer. My grandfather was already gone. They were first generation immigrants. She always wore an apron and black shoes with thick heels and thin laces, and she spoke rivers in Finnish.

II.
The sound of her pendulum clock knocked in the night. Hours with small bells. A chrome kitchen table and yellow Naugahyde chairs. Her living room was pale green, and the carpet, deep green. On the wall, a pastoral, cows heading toward a barn. A horse drawn wagon on a road winding like a stream. Silhouettes, framed. A family portrait with my grandfather at the center, passed out. A kerosene stove below a ceiling vent. A television connected to an antenna. Behind its convex screen, interference.

III.
When my mother was small, there were ten children in a two bedroom house. Too many mouths. Not enough hands. Shadows had a long reach. In the hallway, a Singer sewing machine. A pincushion. A basket of wool scraps to make a weighty blanket for the bed. A basket of unfinished business, whatever. Don’t think about the past, my mother said, but I was not released. In grandma’s kitchen, a white porcelain sink with cold water only. It drained into a slop bucket behind a white curtain. One must remember to take the bucket out. To wind the clock. To keep the pantry door open so it wouldn’t freeze. To leave things out of the story because there were no words for it.

IV.
No doors inside her house, just curtains with cabbage roses, maroon and pink. Out the window, a view of clotheslines. In Toivola, the place that meant beautiful. An outhouse, a swamp full of tadpoles and horseflies. Inside, a record player, a stack of 78s and 45s. Hank Williams, Johnny Cash. Patsy Cline. Muskeg. All the children left home early. Crickets. Grasshoppers. Cats. The hay slid into the stalls. Hooves on the barn floor. Tails tied with binder twine. There was the other language, over my head. I stepped into the water, off the drop off, couldn’t swim. There was the beer. A very late rescue.

V.
Nights of lighted tobacco, smoke, the bellows of the accordion, breathing: I realize the way my eyes deceive me. Bellow clips, register switches and inside, reeds and wax. I went back, walked on the same ground. I looked into the other country, the places where my grandmother left. Why did she want to go? Why did she stay? I heard just hands playing the instruments, the sound of falling water. The feet that said, forget. The heels that said, don’t mention it. The swish of skirts over secrets.